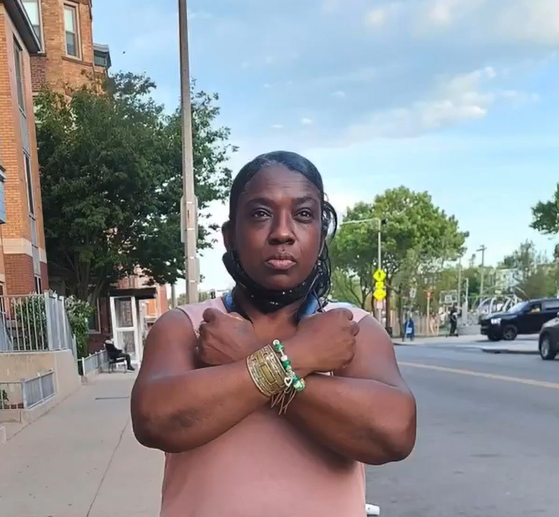 Trayce’ B. realized she wanted to shift her personal perspective and her family’s narrative around the same time she decided to re-enroll in college.

“I wanted to make some changes and I saw people doing things and friends that I knew were really out there doing a lot, had good jobs and [were] educated.”

“When I started changing my narrative of where I want to go in life I changed my kids' nicknames [to] how I see them - ‘Mighty Warrior,’ ‘Twinkle Little Star,’ ‘My Dancer’ and the ‘Last One,” she continued.

“I try to instill history in them from my parents and their grandfather's parents and so forth. I hold them accountable. We just hang out. I try to keep up with them. We dance. I even get out there and play flag football,” she added. She carves out time every night to video chat with her grandson, who lives in Georgia, so she can read him bedtime stories.

Trayce’ B. was born and raised in the heart of Dorchester, a neighborhood inside the city of Boston.

“When I was coming up, life was fruitful. It wasn't all this high crime. It was a community raising a village. So if… you got in trouble... if another parent or neighbor saw you doing something that  you had no business [doing], you better believe you were going to get in trouble,” she remembered. “When I moved, I lived a military life and [when] I came back, I saw my community going down.”

So much changed in Dorchester in the 20 years that she was away that Trayce’ B. decided to dive into community service upon her return in 1997.

“I wanted to be involved because I wanted to help make changes. And the only way I knew to do that was get involved.”

Working as an outreach coordinator with the state’s Department of Transitional Assistance allows Trayce’ B. to connect with people who receive public assistance benefits and help them set goals for their futures.

“For a lot of them, it's starting to change that narrative so that they say, ‘Wow, I want to go to school. I want to get a degree’,” she expressed.

Trayce’ B. is a firm believer in networking and encourages her families to incorporate the practice into their daily lives.

“Networking is a powerful word, people don't understand. It changes lives,” she added.

The single mother realized a major accomplishment after she started to make shifts to her perspective. She’d always been active on the school board at her children’s performing arts school, but she decided to join its board of directors to learn more about how business matters are handled behind the scenes. At the time, the school was in need of a new building. So Trayce’ B. did what she does best - she advocated.

“I had to go testify in front of the school committee because they've been trying to get this building for maybe about 15 years. I wanted to… help push to make this happen. So… this year, 2022, they get a brand new building, state-of-the-art performing high school and I feel very proud that I was a part of that journey,” shared Trayce’, who now sits on the school’s board of trustees.

She has been an UpTogether member since 2014, when the organization was named Family Independence Initiative. Now she serves as a family evaluator, helping to design and recruit for the Trust and Invest Collaborative — an 18-month paid research study to understand how access to community, capital, and choice makes a meaningful difference in people’s lives and well-being.

“I just feel like when you're on this system, pay it forward so the next one who might need that extra help can move forward.”

Her work as an evaluator puts Trayce’ B. in the driver’s seat of community-building and shifting stereotypes about Black and Brown individuals and families living with limited incomes. A perspective that drives her to remove harmful labels.

"We don't want to be degraded and belittled. We want to be able to put money away for emergencies."

“When you live in the urban community, we're always… being labeled as the individuals who don't want to succeed. We are not who you assume that we are. Don't assume that the Black, Brown and Beige are not educated or have no balance or no desires or have dreams.  Don't label us.”

Carema loves Detroit for it’s diversity. “It’s people from all walks of life here. One job I work...
Read More

Imagine being someone who served in the armed forces, works as a nurse, a dance ministry...
Read More

Angela’s ultimate dream isn’t just to afford rent in an apartment; it is to own an entire apartment...
Read More